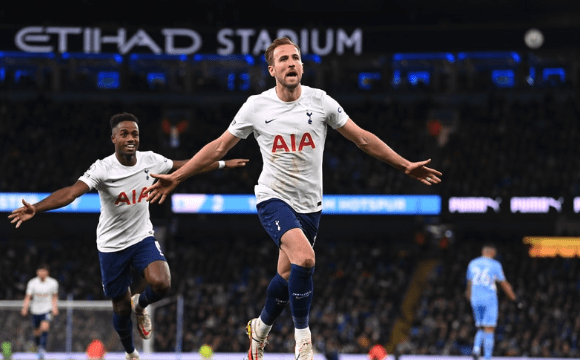 While Manchester City might have thought they had a golden chance to lay down another marker on Saturday evening, the Premier League leaders eventually suffered what was an action-packed 3-2 defeat at home against Tottenham.

Despite storming their way to a stunning Champions League romp out in Portugal a few days ago, the Sky Blues rather drastically failed to build off of that momentum as they eventually fell to their first domestic defeat since the end of October.

Watching their buffer at the top of the table get cut down to just six points, there is no doubt that Saturday’s display at the Etihad has breathed life back into Tottenham’s charge for a top-four finish this season.

With England skipper Harry Kane really breaking Manchester City’s hearts after a remarkable last-gasp winner late in injury-time, we have taken a look at the key talking points.

Laying down what was a real European marker in midweek after claiming a 5-0 romp away at Sporting Lisbon in their first-leg showdown, there is no doubt that Manchester City would have really come crashing back down to earth after a performance that was riddled with mistakes here.

With Ruben Dias getting caught cold in the opening minutes as January arrival Dejan Kulusevski slotted into an empty net, Pep Guardiola’s men looked surprisingly fragile at the back and questions should be asked about what were some real schoolboy tactics on Saturday evening.

Despite coming from behind twice thanks to strikes from Ikay Gundogan and Riyad Mahrez, the decision to constantly float crosses into Spurs’ box with no legitimate striker on the pitch would have left fans around the Etihad hugely frustrated.

Suffering their first Premier League defeat since the end of October, the former Bayern Munich boss also now finds his side in a real battle to claim another domestic crown this season.

Watching Liverpool cut their buffer at the top of the table to just six points and still holding a game in hand, Manchester City will know just how important it is to prove that Saturday’s display on home soil was just a minor blip and not something more concerning.

Coming under scrutiny earlier in the week after an interview with Italian media, Antonio Conte couldn’t have wished for a better response as they made the trip to the Etihad on Saturday evening.

Suffering three Premier League defeats on the spin this month, Conte’s worst managerial blip in over a decade, few would have expected what was a rugged display from Spurs here.

Opening the scoring with just four minutes on the clock, Tottenham looked completely different from the side that suffered a worrying 2-0 defeat at home against Wolves last weekend. In fact, opening the 2021/22 campaign with a 1-0 win against City in north London, Spurs are the first team in five years to land back-to-back victories against Saturday’s hosts.

Leaving Manchester with the mood in their camp likely to be at a much-needed high, there is no doubt that the former Inter Milan boss will have his sights set on guiding the Lilywhites to a Champions League return this season.

Really breathing life back into their top-four charge, Spurs now find themselves sat just four points adrift of Manchester United and still holding a pair of games in hand.

Watching the likes of Emerson Royal put in a season-best display, Tottenham will be desperate to build off of this momentum when they travel to Burnley on Wednesday night.

While Tottenham’s rugged display might steal most of the headlines this weekend, Harry Kane deserves an honorable mention after what was a Man of the Match performance here.

Heavily linked with a move to Manchester City last year in what could have been a record-breaking £150million deal, the England skipper showed Guardiola just what he is missing as he sent Saturday’s traveling support into overdrive with his last-gasp header deep in injury-time.

Eventually unlucky to have not left the Etihad with a hat-trick to his name after Kulusevski was adjudged to have been offside in the build-up midway through the second-half, it was no surprise that Conte was filled with praise for the 28-year-old’s contribution outside of north London.

Involved in all three of Tottenham’s goals here and once again demonstrating his partnership with Son Heung-min for Spurs’ opener, the England ace will now be looking to kick-start his campaign as Spurs look to secure a top-four return this year.