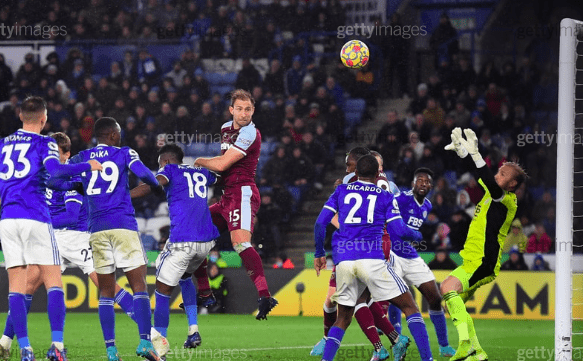 In a contest that on paper looked like it could be an action-packed affair, Leicester and West Ham did not disappoint as they played out a thrilling 2-2 draw at the King Power on Sunday afternoon.

Looking to try and widen their buffer in the Champions League places, the Hammers managed to pile more pressure onto Brendan Rodgers’ shoulders as Craig Dawson snatched an injury-time equalizer.

Crashing out of the FA Cup thanks to a 4-1 drumming at Championship outfit Nottingham Forest last weekend, the Foxes once again missed out on a chance to find a way back into the top-half of the Premier League table.

With both sides having to settle for a single point at the King Power, we have taken a look at the key talking points.

The Hammers show their resolve

Watching Tottenham suffer a shock 2-0 defeat at home against Wolves earlier in the day and with Manchester United also dropping points against Southampton, West Ham would have been desperate to pounce on an opportunity.

However, while the Hammers might have been handed a perfect start as the red-hot Jarrod Bowen opened the scoring with a fine finish after just 10 minutes, David Moyes’ men largely failed to build off of that momentum.

With Aaron Cresswell handing Sunday’s hosts a golden chance to equalizer from the spot just seconds before the half-time break, Moyes would have been left furious by the way his side returned from the interval.

Nevertheless, despite chasing the deficit heading into the final minutes, West Ham did show some of that trademark resolve that they have shown under the one-time Everton boss this season.

With Craig Dawson’s effort coming off his shoulder and finding a way past Schmeichel, there is no doubt that the Hammers would have been glad to have left the King Power with a point to show for their troubles.

Managing to widen their buffer over Manchester United to a single point, Moyes’ men will be desperate to keep up their Champions League charge when they host relegation scrappers Newcastle next weekend.

Another King Power collapse for Leicester

Heading into injury-time holding a 2-1 lead, Leicester fans must have thought that it was impossible for their side to throw away another golden chance at the King Power.

However, while Ricardo Pereira might have handed the Foxes a valuable lead after a fantastic header 12 minutes after the break, Brendan Rodgers’ men couldn’t drag themselves over the finish line.

With Dawson snatching a point for Sunday’s guests with just seconds left on the clock, there is no doubt that Leicester fans would have had flashbacks of their stunning collapse against Tottenham last month.

Watching Spurs’ Steven Bergwijn bag the most remarkable of late goals as the Lilywhites grabbed a last-gasp 3-2 win, the one-time Liverpool boss now finds growing pressure on his shoulders.

Crashing out of the FA Cup at the hands of Midlands rivals Nottingham Forest thanks to a shock 4-1 drumming at the City Ground, Leicester have recorded just a trio of wins in their last 13 matchups across all competitions.

While the second-half performance of Harvey Barnes might have proven to be one of the main positives for Rodgers to take away from Sunday’s meeting, the King Power faithful made their displeasure heard at the final whistle.

Bowen extend on his free-scoring run

Although the Hammers might have been disappointed to have thrown away their early advantage on Sunday afternoon, Moyes and the traveling West Ham support will be boosted by another sellar display from Jarrod Bowen.

Latching onto Issa Diop’s long ball and producing a fine finish across Schmeichel early on, the one-time Hull City starlet finds himself enjoying what has become a real purple patch.

Spearheading West Ham’s charge for a maiden Champions League spot this season, the 25-year-old now has seven goals in as many appearances across all competitions.

A constant threat at the King Power and carrying a huge amount of the Hammers’ attacking intent, it is no surprise that Bowen was heavily linked with a potential move to Liverpool during the January transfer window.

With his sights set on grabbing a spot in Gareth Southgate’s squad for this year’s World Cup, Moyes was once again vocal about his talismans performance here.

In fact, grabbing the assist for Dawson’s late equalizer, Bowen has now recorded 16 Premier League goal contributions so far this season, the best tally of any English winger.