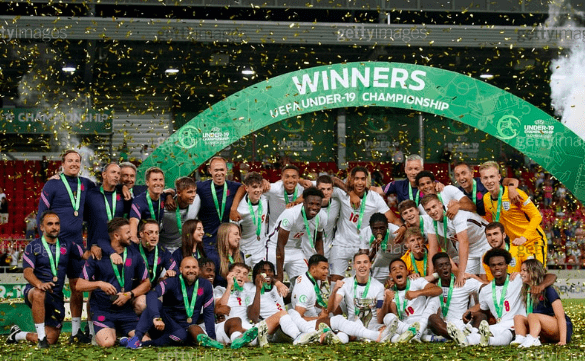 Managing to mount what was another rally on Friday night, England’s U19s were crowned European champions thanks to a thrilling 3-1 victory against Israel in extra-time.

Falling to a shock 1-0 deficit heading into the half-time break following Oscar Gloch’s strike five minutes before the interval, Ian Foster’s young squad eventually topped off what has been a sublime summer in Slovakia.

With Callum Doyle’s second-half equaliser sending Friday’s showpiece event to an extra half an hour, Aston Villa’s Carney Chukwuemeka and club-mate Aaron Ramsey wrapped up a famous night for Foster’s side.

Storming their way to the history books over the past fortnight, we have taken a look at the main talking points as England claimed their second U-19 European crown.

Opening up this summer’s European Championships out in Slovakia tipped by many as one of the standout picks, it was simply a matter of England’s young squad showing their mental resolve.

Breezing their way to the knockout stage after winning each of their three Group B matchups – including a 1-0 victory against Israel last week – Foster’s side has shown why they’re held in such high regard.

Along with managing to show no signs of frustration after putting in a sluggish first-half display here, the Three Lions have certainly made more history this summer.

Mounting what was a sensational late rally against Italy in their semi-final showdown earlier in the week as they clawed their way to a 2-1 victory, few can argue that England are not a more than worthy winner.

Claiming their second European crown since the likes of Mason Mount and Aaron Ramsdale spearheaded England to success in 2017, Foster deserves plenty of praise for the role he has played since taking charge two years ago.

Southgate has a watchful eye on England’s young champions

While many of England’s young heroes this summer might find themselves largely waiting to be given their chance on the domestic scene, there is no doubt that Foster’s starlets will return for the 2022/23 campaign riding a real wave.

Sent a pre-match good luck message from senior boss Gareth Southgate prior to Friday’s final, the 51-year-old would have undoubtedly been keeping a watchful eye on proceedings.

With Foster’s squad becoming just the second England U19s side to be crowned European champions, there have also been some hugely impressive performers this summer.

Along with Villa’s Chukwuemeka cementing his spot as one of Europe’s budding young starlets after racking up three goals out in Slovakia, the duo of Harvey Vale and Alfie Devine have also gained plenty of plaudits.

Receiving public praise from the likes of Tottenham superstar and senior skipper Harry Kane following Friday’s famous victory, Foster’s batch will certainly have one eye on the 2026 World Cup.

Heartbreak for a plucky Israel

While England might leave Slovakia with their name in the history books following Friday’s thrilling 3-1 victory, Israel deserve a host of praise for what has been a remarkable summer.

While Ofir Haim’s squad might have eventually fallen at the final hurdle, few across Europe would have expected the Blues to make it anywhere near clinching a silver medal finish.

Stunning almost everyone as they pulled off a famous upset thanks to a 2-1 win against European giants France earlier in the week, Israel certainly deserved their lead heading into the half-time break here.

Dominating large spells of the opening 45 and sending their dugout support into overdrive as Gloch’s opened the scoring with a wonderful solo effort five minutes before the interval, it will take Haim’s young side some time to recover.

However, going punch to punch with an England side that has been widely tipped as the best U19s squad from across Europe, Israel have gained the hearts of many.

Upsetting the odds as they clinched that famous victory against Les Bleus in an iconic semi-final clash just a few days ago, there are a host of praise for Haim’s dark horses.