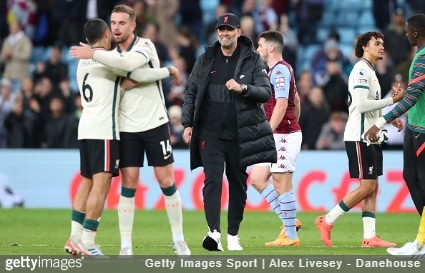 Liverpool did just enough to stay in the Premier League title race on Tuesday evening at Villa Park, beating Aston Villa to equal Manchester City’s point tally for the time being.

Their job became very difficult early on, as Douglas Luiz took full advantage of a linesman blunder to open the scoring for the home side. Joel Matip was composed enough, however, to equalize from a scramble inside the Villa box very quickly. Luis Diaz eventually set Sadio Mane up for a header skillfully guided by the Senegalese past Emiliano Martinez for the goal that made sure the visitors walked away with the whole prize.

The Video Assistant Referee (VAR) system was introduced to try and reduce the human error factor in officiating as much as possible, but the goal Douglas Luiz scored in the third minute laid bare a heavy flaw in the concept. “Clear and obvious error” – that’s the term to describe the cases in which the VAR should intervene, and yet, this error, as clear and obvious as it gets, the rules did not allow to be corrected.

Ollie Watkins was clearly offside – there was nothing marginal about it, it was quite obvious – when a long pass found him running on goal. Alisson Becker saved his subsequent shot, and that was clearly the moment for the linesman to raise his flag – but he didn’t. Consequently, a new passage of play began according to the rules, from which Luiz scored.

It would be interesting to hear the linesman’s explanation for this. It’s probably safe to say that bias can be ruled out as a cause and it was some kind of an honest mistake – wrong positioning or a distraction in the crucial moment which had him looking elsewhere.

Similar situations have happened before, particularly in the Premier League, and it’s not easy to understand, without pointing out some kind of incapability with the people in charge. It’s quite human to make mistakes, but the definitions of the situations in which the VAR intervenes certainly need to be reconsidered.

Let’s be clear – this particular moment may have hurt Liverpool and helped Aston Villa, but there was a number of mistakes from the officials that went the other way as well. Along with his linesman, referee Jonathan Moss had a nightmare of a game throughout.

this was given as a liverpool free kick😭 pic.twitter.com/I4fa9cplji

It’s not very often that a team in the bottom half of the Premier League table comes out to attack a title contender in the manner Villa did in this match. Right from the start they pressed high, and there were moments when they seemed quite likely to get a result, pushing the line of battle as high up the pitch as possible and attacking in numbers. The two strikers, Watkins and former Liverpool man Danny Ings, were a handful throughout, giving Matip and Virgil van Dijk quite a lot to do, as well as testing Alisson Becker now and again.

Luiz, John McGinn and Marvelous Nakamba were relentless in the middle of the park, fighting tooth and nail for every ball and winning a large number of duels there. Matty Cash and Lucas Digne did very well in keeping Liverpool’s wide players mostly quiet. Ezri Konsa also put in a fine performance in the heart of defence, which is unfortunately (from Villa’s point of view) more than can be said about Tyrone Mings. The England international was beaten relatively often, both in the air and on the ground, and was guilty of losing the ball deep in his own half a few times to boot. Obviously, there were a couple of good moments from him as well, but overall, he won’t be too keen to remember this match.

Looking at the whole team and the way they played against a Champions League finalist which happens to be his former club, Steven Gerrard will have been proud with what he saw. They certainly gave it a good go, despite the fact that there was little for them at stake.

Goalkeepers like Alisson, or for example Manchester City’s Ederson Moraes or Bayern Munich’s Manuel Neuer, who frequently venture far from their goal to prevent the high defensive lines of their teams getting exposed by pace or to help in building play from the back, tend also to make mistakes which are sometimes extremely costly. Alisson made one such mistake in the first half when his pass, probably intended for Virgil van Dijk, got intercepted by Watkins whose persistence almost paid off. The Brazilian got away with it this time, having corrected the mistake himself with a bit of luck on his side.

But just like Ederson and Neuer, Alisson is naturally a fantastic goalkeeper and he made up for his momentary concentration lapse with several superb saves, particularly from Ings. In fact, he ended up being the reason for Liverpool getting their win about as much as Matip and Mane, the two goalscorers, and it’s questionable if the club had a better man between the posts at all in the Premier League era.

What we saw in this match was a glimpse of the Liverpool of 2019-20, when they comfortably won the title after 30 years of waiting. During that campaign, they often struggled against stubborn opponents and won matches, as it would seem, by mere luck or the tiniest of details. But the fact is, those were displays of a winning mentality, a confidence which tended to keep them calm right down to the final minute, and they almost always found the goals necessary to win. This description might as well be used to describe the affair at Villa Park on Tuesday.

It has been said enough times already, but once more won’t hurt – the job Klopp has done with this team since taking over in October 2015 is amazing. The building of this fantastic mentality, perfectly reflected by the famous tee-shirt worn by the injured Mohamed Salah as his teammates shocked the world by thrashing Barcelona at Anfield in 2019, is surely one of the main contributions of the charismatic German, along with the picking of the right players and forming a system that brings success on the pitch.

Liverpool haven’t lost a league game in 2022, but it still probably won’t be enough lift the trophy at the end of the season. Manchester City still top the table, having made a significant improvement on their goal-difference against Newcastle a couple of days ago. They and Liverpool are both on 86 points, though City still face Wolverhampton Wanderers at the Molineux on Wednesday to get to 36 matches played, which where Liverpool are now.

The advantage obviously lies with the defending champions. For Liverpool to stand a chance of overtaking them, City must lose one of the three remaining matches, or at least draw twice, and given the vast quality of Pep Guardiola’s side, it’s very hard to imagine either scenario coming to pass.

The hope for the Merseysiders remains, at least for the more optimistic among their supporters, but the FA Cup and the Champions League trophy are now likelier to appear in their cabinet at the end of the season than the Premier League one, even if the opponents they face in the two finals this month are Chelsea and Real Madrid.